Android accounts for 74% of active devices in the Chinese smartphone market, leaving the iOS ecosystem with just a 26% share. Yet, Apple iPhones and iPads represent 25.6% of monthly active mobile devices in China, well above that of its closest rivals OPPO, Huawei, Vivo, and Xiaomi at 17.9%, 14.1%, 13.9%, and 12.3%, respectively. 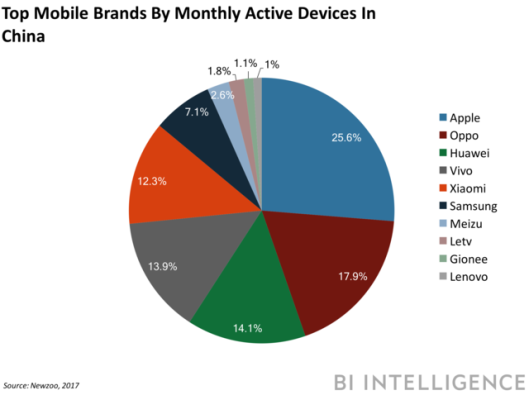 The fragmentation of the device and software ecosystem in China could play to Apple’s advantage. China is an important growth market for Apple, but one that Apple has been struggling to capitalize on over the past few years; although China accounts for the most active iPhones in use globally, it’s only Apple’s third-largest market in terms of revenue.

The release of the iPhone X has driven faster switching rates from competing vendors like Huawei and OPPO, according to Morgan Stanley. Apple’s newest flagship has also spurred upgrades; about half of China’s iPhone X buyers upgraded from the iPhone 7 or 7 Plus, which are only a year old.

Apple announced the removal of several virtual private network (VPN) services from its App Store in China, after the Chinese government had been pressuring the firm to ban all VPNs — which allow users to bypass China’s heavily regulated internet — that aren’t approved by state regulators. Continued cooperation with the Chinese government could help Apple win over additional consumers and developers in China.