macOS licensing?
One path to making Mac Pro a more broadly desirable product might be to open up licensing and franchising of Apple’s core architecture designs to vendors who can add value and broaden the demand for macOS hardware. Apple could potentially partner with other PC vendors to use its logic boards designs to develop workstations and high end desktops that run macOS.

Apple’s last attempt at Mac licensing, starting in 1994, gave other hardware makers specifications for building their own machines that could run the Classic Mac OS. This turned out to be a bad deal for Apple, because it generated lots of new unpaid development work for Apple in exchange for the loss of its own high end Mac sales, where most of its profits derived from.

At the time, Macs weren’t standard PCs but rather specialized computer systems that required bespoke support in the Mac operating system. Since the move to Intel in 2006, Macs are essentially a subset of the standard PC architecture. Apple also no longer makes most of its money selling higher end Mac desktops, making it easier to cede that market to PC partners.

Rather than just authorizing “hackintoshes,” Apple could sell PC makers ready-to-use Apple logic boards developed for Mac Pro, or develop a standard logic board that partners could use for sale in high end desktops, workstations or even servers–all markets Apple appears to have lost any interest in on its own.

Apple already has a robust MFi licensing program related to its iOS product lines. Expanding MFi-style licensing to the high end niches of macOS could allow third parties to assume the risk in developing those markets.

Apple has effectively already done this in IoT with HomeKit. Rather than building its own home automation hardware, Apple has developed (and enforces) specifications so that these third party devices work well with its own platforms.

By limiting the terms of its licensing deals, Apple could continue to shape the overall strategy of its macOS platform–creating boundaries for the types of products it would need to assume OS development support for–while expanding the potential reach of its technology outside of the high volume, high margin hardware it currently focuses upon internally.

One potential downside is that such a licensing program could turn into a distraction for the company. However, a larger potential problem is that there may not be enough demand for Macs in higher end markets (such as CAD, biotech and other STEM research).

So excluding iPads, Apple’s total Mac sales generated 76 percent of the revenues of HP or Lenovo, two PC makers that IDC reports as both having three times the “market share” of Apple in terms of PC unit shipments.

That’s not really fair however, because HP and Lenovo PC revenue figures also include their tablet and other sales. Fold in Apple’s iPad business and Apple’s non-phone computer revenues are $43.46B, over 145 percent of either HP’s or Lenovo’s comparable revenues, or 73 percent of the revenues of both HP and Lenovo combined. 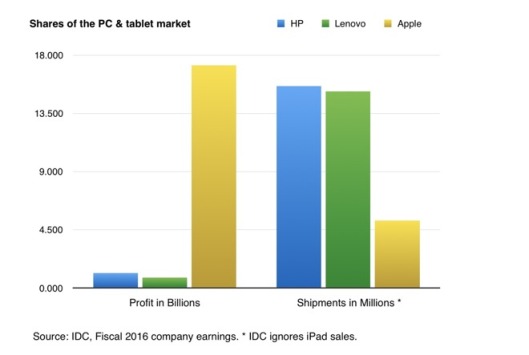 Opportunity Cost
Working to wage war on Windows and build out a macOS-exclusive software library in order to take over the remaining non-premium segment of the PC market would be very expensive. Another way to spend those efforts would be to invest in computers that are selling in higher volumes and making more money than PCs: mobile devices.

That’s why Apple has been focused in beating Microsoft and Google (and HP, Lenovo, Dell, Asus and Samsung) in sales of premium mobile devices, where real money is. iPhones are higher margin computers–and far more frequently replaced compared to PCs (which might not be replaced for five years or more).

That’s also why Apple’s primary investments are made in the iOS App Store, where nearly 1 billion users shop, compared to the Mac App Store, which serves a total potential population of closer to 150 million.

Apple’s Mac business is larger than ever. Even if the total market never significantly grows again, just maintaining a replacement cycle for today’s installed base of Mac users would be a pretty good business on its own. However, it’s harder to see how it could be valuable to invest extraordinary efforts into massively expanding Apple’s desktop Mac business.

Another way Apple could greatly enhance the value of its Macs is to enable users to host existing iOS apps on the Mac desktop. This would eliminate some of the work for developers to bring iOS apps to macOS, while making it possible for companies to standardize on iOS for custom development while still being able to access those apps on Mac hardware for users who need or prefer a conventional PC. 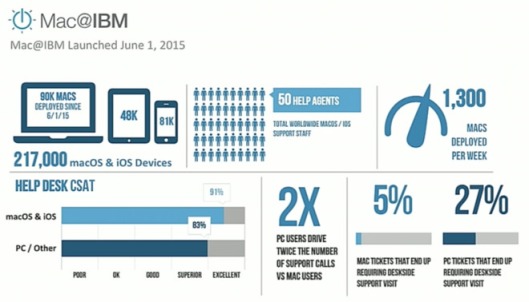 Apple has enough money to make a really fast desktop Mac Pro even if it doesn’t sell in significant quantities. It did this in 2013. But without making a material change in the world, such a vanity project doesn’t seem capable of much longevity.